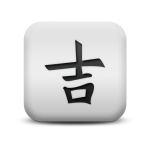 This week has been filled with wishes of good luck as I went off to an important interview.  Everyone one I told about it was very forthcoming with this thing called luck. In fact I was told off by someone close because I had only told them about the interview afterwards, and their response was: ‘I didn’t even get a chance to wish you good luck’.    The interview went really well and I have been quietly sitting with my thoughts basking in the knowledge that it was a success.  The next natural and almost instinctual step was to tell everyone who wished me luck, and to express my gratitude for this ‘good luck’.

Since the dawn of time man has been obsessed with the idea of luck and good fortune.  Human culture is littered with examples of talismanic charms and symbols that have come to represent luck.  A rabbit’s foot, a four leafed clover, double egg yolk, an up turned horseshoe, ladybirds, scarab beetles, actors told to ‘break a leg’ and even numbers have all been assigned as purveyors fortune and good luck.

As I buzzed my way through texts and emails thanking people, a thought manifested itself and in a flurry of curiosity, questions came tumbling out:  what is luck and why are we as humans so compelled with the notion of giving it away freely and so earnestly?  Does it actually have a sphere of influence on the outcome?  Did all these people who sincerely wished me ‘luck’ actually affect the outcome?

Upon reflection these questions are somewhat weighty subjects and have been discussed at length all over the internet. You only need to delve a little deeper and you will find a wealth of information on the ideology of luck and concept of good fortune.  Philosophers have applied their logic to it, religion has wrapped its crooked fingers around it and scientists sneer at it because it is intangible and unprovable.

Me – I’m not about to delve into the genome of luck…  But rather I wish to share an intriguing thought I had as clamoured about with my questions.

Firstly what is luck?  Luck, as it is defined, is the fortunate or unfortunate outcome of an event without one’s own intention or will, and beyond control.  Success or failure apparently brought on by chance rather than through one’s own actions.  And so the cynic in logic and rationality simply says:  “this means nobody has any control of luck and therefore luck can’t really be given it away. And if it’s chance that alters my fate, then what have your wishes of luck accomplished?  They are merely kind and thoughtful words.”

If you’ve read my past posts, you will see that I often talk about something called ‘focussed intentions’. The idea behind this is simple – what you focus on, is what your reality will be.  There is nothing religious or scientific about this statement, it’s more an accepted truth if you understand the concept. The key is to know what you are focussing on and to correct your thoughts and words if you are focussing on the wrong things.   And this brings me to the last sentence of the cynical logistist: “They are merely kind and thoughtful words.”   People’s intentions are focussed through their thoughts and their words.  And if done with sincerity and honesty – they have the power to influence a desired outcome.  So I genuinely say thank you to all those who put their intentions into words and focused on me and my interview, even if it was just for a split second.  I am truly gratefully and blessed to have people that care about me so much.

The secret to success is not really a secret.  It’s about knowing one’s self and understanding how our self-beliefs work. Our limitations are a result of a poorly programmed unconscious mind and if one learns to reprogramme the unconscious, you begin to remove your limitations and unlock your true potential as a human being. 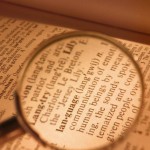 When we verbalise a thought, it becomes tangible and we can actually begin to analyse it – if you are analysing your thoughts you are mastering the art of being self-aware.  The key is not to question yourself and create self-doubt, but rather to find a way to positively rephrase your thoughts.  For example in preparation for my interview I repeated the following statement to myself every morning:  “I am confident, knowledgeable and successful” – instead of saying:  “I hope I get do well”.   I chose to say this phrase it in the mornings because according to research the mind is at its most receptive.  I did this to ensure that I was reprogramming my unconscious mind. I wanted those words to be a belief , a part of me and not just a statement I spoke.

If you wish to affect a real change in your life, start by your aligning your intentions with your words. Language is perhaps the most important of all your personal transformation tools because when you become self-aware and emotionally balanced, your language patterns will naturally change, but the catch is to use language patterns to become self-aware in the first place and it is also the way to focus your intentions.

As always, practise makes perfect so go out there and start to think about your daily words. Ask yourself:  “are my language patterns positive or negative?”  This simple and powerful statement is the first step to changing your language patterns.  If you need any help or advice, or just some guidance on how to do this more effectively, please use the ‘contact me’ tab.  I would be more than happy to help.

It would be remiss of me not to say ‘good luck’.

Christmas is done and dusted.  Bring on New Years!   And, as we all know, New Year is a time for those well-to-do resolutions, the ones that last a week, maybe two – but before you know it, they are gone and our well meant intentions have evaporated and we are back to living in our daily bondage.  Have you wondered why that is?  Or have you just accepted it to be a truth and kept the status quo?

Well, there you have it my friends, the answer is always within your reach:  You’ve kept the status quo.  So in an effort to keep you inspired and make those resolutions stick this coming year, I thought I’d share a quote with you that’s got me excited and charged for 2013.  However, proceed with caution, the following is not for the faint hearted.  He tells it like it is and it’s a strong tonic for some.  Ready? Okay lets go!

“Seriously, if you always put limits on what you can do, physical or anything else, it’ll spread over into the rest of your life. It’ll spread into your work, into your morality, into your entire being. There are no limits. There are plateaus, but you must not stay there, you must go beyond them. If it kills you, it kills you. A man must constantly exceed his level.”

I love this quote!   Bruce Lee is telling you like it is – limits are self imposed.  We create limits and once we do, they take over lives.  The scary thing is, we are all so blind to this kind of behaviour that it becomes common place in our lives and we perpetuate the cycle of ‘status quo’ without even realising that we are in fact affecting our entire lives.  As I said, we create limits.  But the worst part of all of this is when we start making excuses to justify why we create these limits!  This is what is referred to as a self-fulfilling prophecy.

Very simply:  You start believing your excuses and accept it as your reality.  And this is most common during New Years.  We have the best intentions (for example losing weight) but a week in, we feel challenged so we create an excuse.  ‘It’s too cold in the mornings to go to the gym or go for a jog, I’ll do it after work’.  After work arrives and another excuse ‘oh its’ been such a long, hard day at the office, I’ll do it in the morning’.  And so forth.  Once you’ve said it to yourself enough times – ‘its too cold in the mornings and I’m too tired after work’ – that is what you believe.  It’s not an excuse anymore, it’s your reality.

Remember what I said in my first post (Shadow Shibari) – the first step to making a change is becoming self aware.  We cannot fix what we do not know is broken.  But now you KNOW.  You know that the next time you start making excuses for keeping the status quo, you are limiting yourself and that by believing your excuses, you are creating your own reality.

Ask yourself – is that really the reality you want to be living in?  You really are the master of your own destiny. Change the status quo.