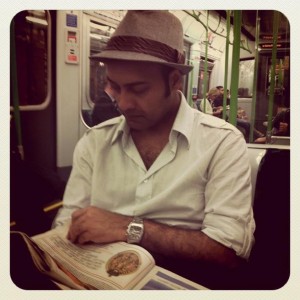 My name is Dinesh, surname Joseph.  Unusual combination I’ve been told – Hindu and Christian.  For the record, not that it matters to me, but for the sake of clarity, I am Indian, so are both of my parents.

I was born in Johannesburg in 1976.  My parents moved to the Transkei when I was about 5 and I grew up in a town that no longer exists (metaphorically speaking of course), a place called Umtata.  The town itself still exists, but the place I called home for so many years has vanished, and it has been renamed to Mthatha.  It was magical town, a haven from apartheid and a community built around the most amazing school ever – it all played a part in defining me as the man I am today.  I will always call it home, and I will always call myself a Transkein, just not the world’s face, because I can’t bear telling this story over and over again.  Silver lining – I can refer them to my blog now!

After I finished school, my entire family (parents and two younger sisters) relocated to another crazy little bastion of open mindedness.  A town called Grahamstown.  I attended Rhodes University and ended up working and living in Gtown (as it was affectionately referred to).

After some life defining relationships, I allowed myself to flit aimlessly between Grahamstown and Cape Town for a few years (2001 to 2005), until I made the decision to come to London.  In March 2006, I landed and so began a new chapter in my life.  And just as quickly, it seems 7 years on, I have to leave – the chapter will end on the 26th of January 2013.

For every action there is a reaction – and this blog is a reaction to the closing of the London chapter.  London has matured me and given me the tools to do what I’ve always wanted to do.  And I’ve always wanted to guide, mentor and inspire people.  Cheesy – perhaps, but it’s who I am, who I’ve always been and more importantly who I want to be.  Incidentally, I’m a qualified trainer and have been working in Training, Learning and Development for almost a decade now.

Dislikes: Racism | Religion | Arrogance | Society’s obsession with Celebrities | Being cold| Blue Cheese | Giant Corporates who make billions, but we still have starving people in the world

One thought on “Me”